Time for an applause….. we finally squeezed in a day to explore ENGLAND. Being under 2 hours by train from central London makes it inexcusable to not see Cambridge. We’ve heard from lots of our London friends that it’s a great little town to make a day trip of, so we were eager to see what all the fuss was about.

All we knew about Cambridge was that there is a university there where all the ‘brilliant’ kids go. Little did we know it would be the most charming (and medieval) college campus we would ever encounter. The city itself is a lot larger then we expected – the university has many colleges spread all over, there is a typical high street with restaurants and common stores, a whole different shopping section centered around a mall, and then plenty of other side streets filled with tiny independent shops & pubs galore. It was easy to see why so many people could fall in love with this place.

To get better acquainted with Cambridge, we embarked on a tour to learn all about the university. But this wasn’t your regular tour, it was a punting tour! We got to enjoy our tour from The River Cam and float along as the tour guide fed us tons of information about the enormous & outstanding history of Cambridge. [FYI – a punt is a small, flat bottom boat that are commonly used in shallow water and date back to the Edwardian times.] It was a really cool experience and I highly suggest it. Punting tours are infamous in Cambridge! Also, don’t be scared about the winter weather – we went in February and the company provided blankets and hand warmers for everyone. Such a great touch!

One thing we learned that was complete news to me, is that Cambridge University is made up of 31 individual, constituent colleges. The colleges are all self-operating and accept students of all disciplines, although some may be biased towards science or math for example. There are 3 colleges that only accept women. And some colleges are known for reputations such as having liberal political views (King’s) or strong ties to environmental causes (Churchill). What the university shares is all faculty, research centres, and labs. For example, no matter what college you go to, all students would still use the same library. And when applying – candidates apply specifically to their preferred colleges and keep their fingers crossed for admittance….

After our tour we decided to walk around the town to see a few of the colleges up close. We visited Pembroke, which was my favourite. It’s the 3rd oldest college and one of the largest with around 700 students. I liked it because it doesn’t look like much from the outside, just tall stone walls blocking any view of what’s behind them. But when you enter, it opens up in to a beautiful, green courtyard filled with lots of shrubbery and very nice chapel. We also saw Corpus Christi and then King’s – probably the most famous and certainly what you picture when you hear Cambridge. It’s highlighted by King’s College Chapel, the largest on campus, and not only opens out on to The River Cam, but also has an entrance right along the main road of the city.

We went for lunch at The Pint Shop. We had passed by a few good looking pubs, but for some reason the outside sign screaming: MEAT, BREAD, BEER – was calling our names. This place has a ton of different beers on tap, but what I loved was the vibe / interior decor. It felt very hip with the exposed piping against the subway tile bar, but mixed with the rustic wood and mix-matched furniture, gave it a laid back and homey feel. Anywho – delicious meal as usual. We had seen tons of people ordering their Scotch Egg at the bar so that was a no brainer, as it usually is. I got a fried chicken sandwich and Joe had a lamb kebab….mmmm. We also split some deep fried artichokes and truffle spuds – obviously carbing up for the next half of our day…..

We walked around the town a bit more, but decided to head back to the river to see more of the colleges. We walked over a bridge to the other side because we really wanted to see St.John’s. It’s MASSIVE and literally looks like a castle. We walked by Trinity College and the gardens, which were so lovely at this time in the afternoon. But when we got closer to St.John’s, we realized there was a small gate surrounding the outside of the campus.  It’s pretty hidden by overgrown trees, but there is a small sign that states that this college is not open to the public. I was bummed, but you know that won’t stop Joe. There was a small creek below we would have to cross over. Luckily Joe has extra long limbs and was able to easily navigate his way across the water by stepping on a rock and hanging on to tree branches. I am the opposite of long limbed so once he was over there, we realized I was stuck. The banks were slippery and I had my camera so there was no way I was going to risk falling in. But then I noticed the gate had a fairly large opening on one side of the spindles. Joe didn’t think I would fit but I pretty easily squeezed my way through, and voila! We were at St.John’s.

We walked inside the courtyard and sneakily peeked around the campus. We were also able to get an up close view of the famous Bridge of Sighs. We even were able to walk over it to see the other side of St.John’s, which literally transported us to what felt like Hogwarts. Every corner looked like a scene straight out of Harry Potter – so old school British! After wandering around for a bit, we found ourselves back on Bridge Street, one of the main roads through the city. We walked around this super quaint town lined with the cutest restaurants and Gothic churches and tons of people walking around. We stopped in some shops & grabbed a coffee until the dark finally caught up with us. We were pretty exhausted from an early start and tons of walking, so decided to head back and catch the next train to London. Big thumbs up for Cambridge! 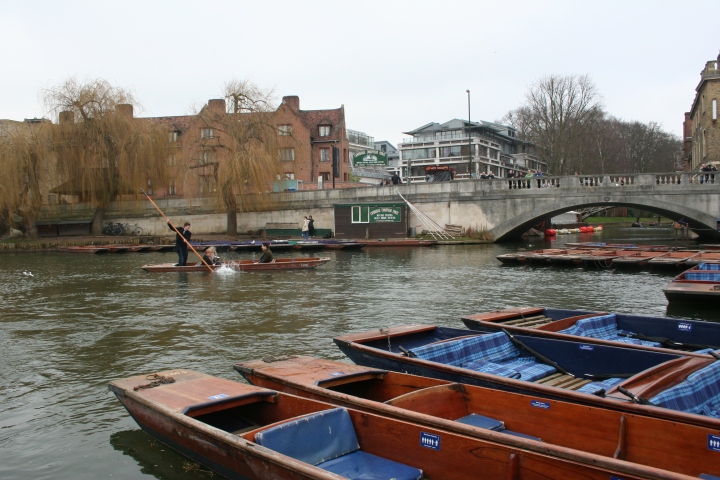 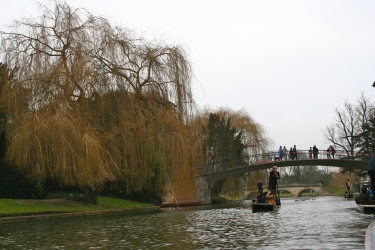 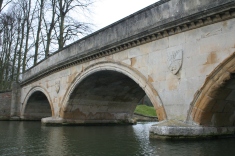 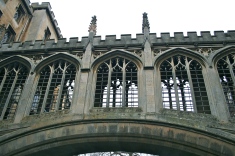 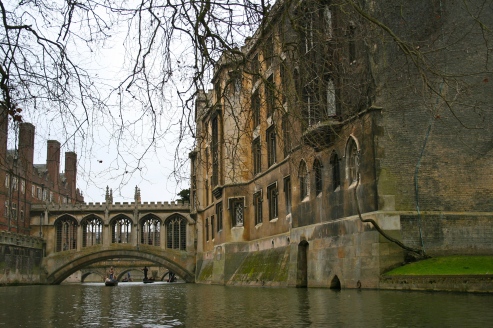 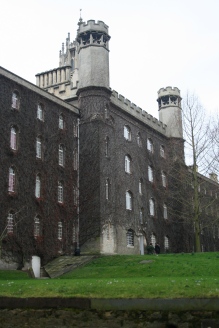 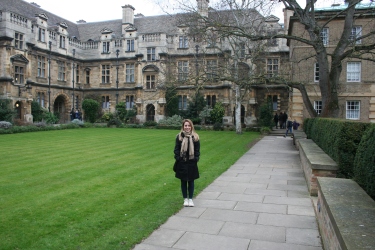 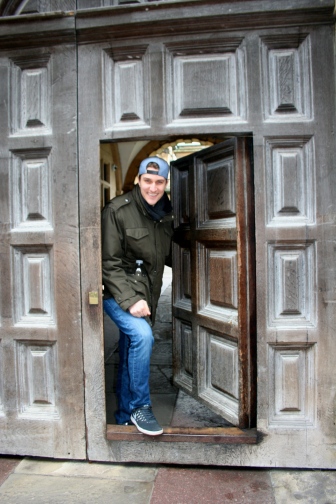 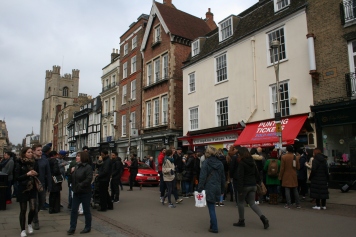 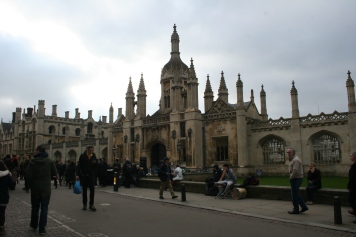 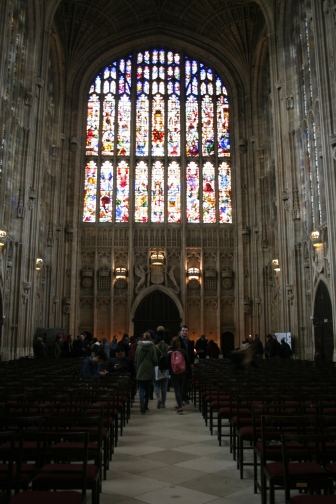 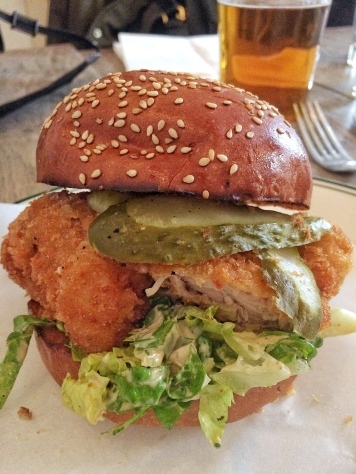 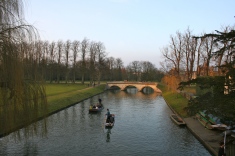 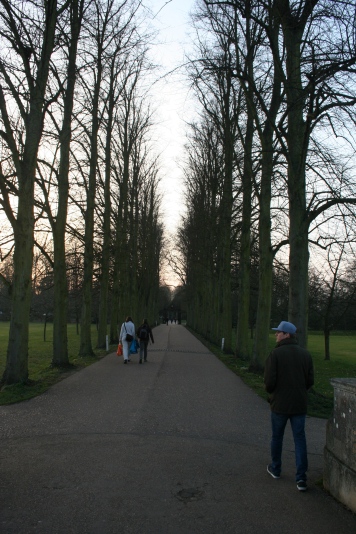 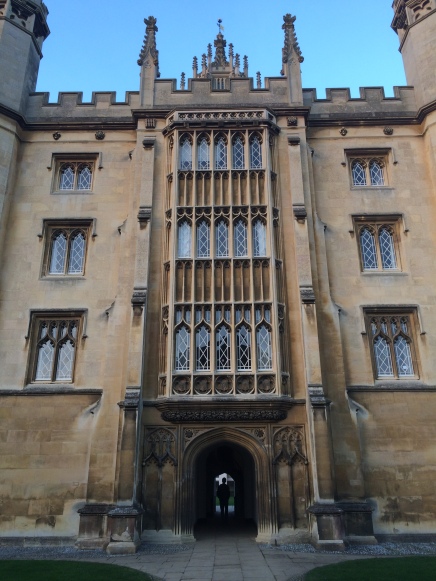 One thought on “Day Trip to Cambridge”