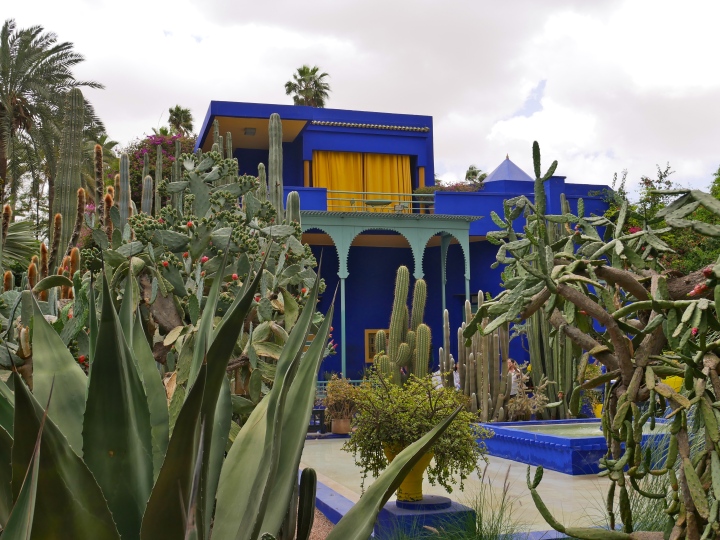 Please excuse the title of this post. Morocco is an incredible place full of rich culture, lovely people, and delicious food. However I don’t think I was prepared for how chaotic it would be. There is a crazy and overwhelming rush about this city, with extra emphasis on crazy when in the medina. But more on that later…

So then, Morocco! Finally, we were travelling somewhere other than Europe for the first time since moving to London. We were both sooo excited that a quick 4 hour flight would have us in Northern Africa, where we both could set foot on this continent for the first time! This would be a special trip for us because we would be celebrating our one year wedding anniversary (we made it!), so we knew he wanted to choose a location we were extra excited about.

We landed in Morocco pretty early on a Friday, and what an impressive airport! Not only is it beautiful & clean, we were extra impressed with the level of security. Luckily, we arranged a transfer with our riad so our driver was waiting for us as soon as we exited. You may be asking yourself, what the heck is a riad? This is the name for a traditional Moroccan home which is built with a courtyard in the centre. Many times the courtyard has a garden with a seating area, and sometimes even a small pool. We definitely suggest choosing a riad for you accommodation when in Marrakesh because not only do you obviously get a more authentic experience, but also it is a warmer, and friendlier environment than your standard hotel due to the smaller size. Our was called Riad Goloboy, which was hands down one of the coolest spots we’ve stayed at. I have to admit I picked it sheerly based on the AWESOME interior decor & outstanding reviews on TripAdvisor, but it was perfect all around. Great location OUTSIDE the medina (key!) but still within walking distance, BUT also walking distance to the Hivernage area of Marrakesh, which we happened to spend a lot of time in.  The other reason I also really like the idea of riads is because there is one for every budget and taste, we had so many to choose from – some a little more luxe than others – so just do your research and you will certainly find one perfect for you!

Our first mission was to get some food! We had heard from friends who had just visited Marrakesh to not miss El Fenn, a very hip & popular riad with a rooftop pool and restaurant. We decided to walk there to get our first real lay of the land. We walked past the Koutoubia Mosque, which I’m sure everyone would recognize from pictures. The tower is called minaret and is an important part of the city of Marrakesh. Not only is it visible from every where in the city, but can also be seen from the Atlas mountains and often serves as a landmark for lost travelers. This is also where the call to prayer is made from, 5 times a day. One thing I found so interesting is that this prayer is made by the same person, every day, and is always live – it is not a recording! Talk about responsibility!

After we made it to El Fenn, we were unfortunately told that they were not open for lunch but we were free to get drinks. We wanted to check out the place so we took them up on the offer. Let me just say this is a gorgeous riad, impeccably styled, with a stunning courtyard that is surely to be coveted. We made our way up to the roof terrace where we were in for an even better treat. Gorgeous views of the medina and the city, as well as an open air restaurant and a pool that was calling our names. The second disappointment (mainly to Joe) is that the pool is for guests only. We stayed for a drink and to snap some pictures, but then were on our way since we were both now bordering h-anger 😉

Our next option was also recommended by friends (and everyone on social media), Nomad restaurant. As if Marrakesh isn’t #interiorgoals enough, this place really did it for me. All black & white, with pops of grey and basket weave textures – it was my minimalist heaven. If the food was any reflection on the decor, I knew we were in good hands. Again we climbed to the roof with impressive views directly over the medina. We shared a bunch of things including a traditional Moroccan mezze platter, a vegetarian salad plate, and a burger. As I’m sure you can imagine, it all hit the spot. Between the view and the food, this lunch was a perfect kick-off to our Moroccan adventure.

The first site on our journey was one I’ve been lusting over via Instagram for a couple of years now. Jardin Majorelle is a botanical garden off the beaten path from the busy city filled with exotic plants, numerous ponds & fountains, as well as a museum dedicated to the Berber culture. This place was an overwhelming mix of beautiful art & nature. From the hundreds of different cacti (slightly obsessed) to the colourful tilework and overgrown bougainvillea hanging everywhere, it was one of the most special places we’ve ever visited. The colours were just stunning. We learned that the brilliant cobalt blue used throughout the garden has been immortalized as “Majorelle bleu” named after the park’s creator, Jacques Majorelle. We also learned that due to unfortunate circumstances, Majorelle had to sell the park, but luckily another Frenchman who found the gardens a huge source of inspiration, could not let it fall in to dilapidation and has been maintaining it ever since. This savior was Yves Saint Laurent, who currently has a monument in the gardens and a museum opening in his name this fall. We spent a good amount of time here, wandering through all of the different pathways. I could have stayed forever taking pictures, but Joe continued to gently remind me that we did have other things to see that day. Bottom line is: do not miss this when visiting Marrakesh. In fact – move it to the top of your list!

We took a taxi back towards the Medina, where our next stop was Palais Bahia. This complex originated as one home surrounded by a few smaller ones, and eventually converted into a palace by Si Moussa, who was “grand vizier of the Sultan”. It is made up of a series of riads, courtyards and gardens and is a serious maze to navigate! We took in a good dose of Moroccan style architecture and even sat in the main courtyard and enjoyed an extra sour orange that Joe plucked right from the gardens.

Next and last location to visit of the day was El Badi Palace; an expansive complex with a large central courtyard and water basins, surrounded by paved walkways leading to rectangular basins which are actually the ruins of old homes. I have to admit there is not much to see here at all. Just a whole lot of stone. Apparently it was a beautiful and lavishly decorated palace during the Sadiaan times (about the 16th century). I did like how cool my pictures were coming out though, there’s something neat about such a harsh background. After we zipped through this place, we were both pretty tired from a nonstop first day of sightseeing. We wanted to sit & we wanted a drink, which lead us to…… The Pearl. This was recommended to me by a co-worker as a good place for a rooftop drink. This hotel is located in the Hivernage area of Marrakesh which is where a lot of the 5 -star luxury hotels and nightclubs are situated. We were pleasantly surprised with how chic yet unpretentious this place was. It was pretty quiet when we arrived so we were able to snag a couch and do a bit of sunbathing while enjoying our cocktails and snacks. It was seriously such a relaxing & enjoyable way to end our first day exploring.

We decided to have a late, late dinner at a place called Dar Yacout. I had done sooo much research on where to eat while in Marrakesh, and I read that dining here was truly an experience. When we arrived, we were given an extra friendly welcome by the host (who I gather is the owner) as we entered into the most enchanting courtyard of the trip. There were candles and lanterns all over, illuminating the riad with a welcoming, yellow glow. He then took us up to the rooftop terrace, which had incredible panoramic views of the medina, where we enjoyed some pre-dinner cocktails. This was quite a special moment, such a clear night with all of the lights of the busy city sparkling down below – our first night in a country (and continent!) that was so new and exciting to us.

Once we finished our drinks, we were escorted down to the dining room where our FEAST would begin. I put that in caps because any time I’ve used the word feast before now really wasn’t a feast. Basically you get a set menu which includes the al fresco aperitifs, a massive amount of traditional Moroccan fare, and unlimited beer and wine. We were seated in a super romantic nook, and almost immediately after we sat down, the food (and booze!) started flowing. I’m not exaggerating when I say we had enough food to feed probably, 6-10 people. We had a mezze platter with olives, pita, tzatziki, baba ganoush, and an array of other dips; we also had multiple salads from greens to grains and everything in between. For the main event we’re served a whole chicken tagine with lemon AND a lamb tagine. Omg. I can’t even remember what else came on the side but I know we barely put a dent in it. And let’s not forget the dessert that followed – pastilla (deep fried dough covered in honey) and other assorted pastries. I can’t forget to mention that the whole dining experience was made even more memorable by the amazing & attentive staff as well as the live musicians that were playing. Between the decor & ambiance, the entertainment, and the delicious meal, we had the most spectacular experience at Dar Yacout. Truly a night we will never, ever forget. 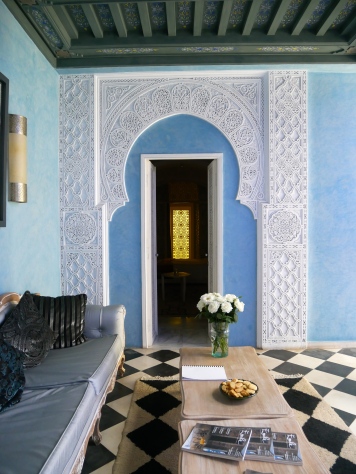 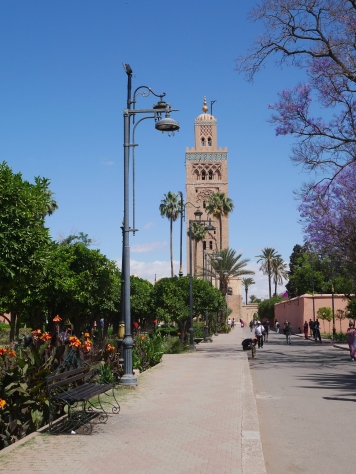 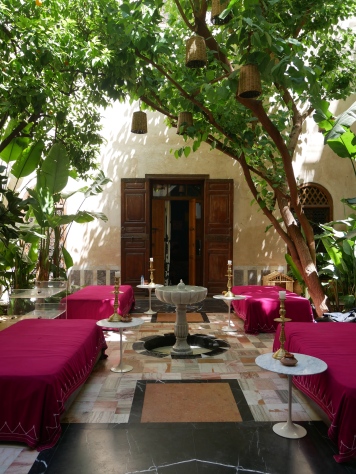 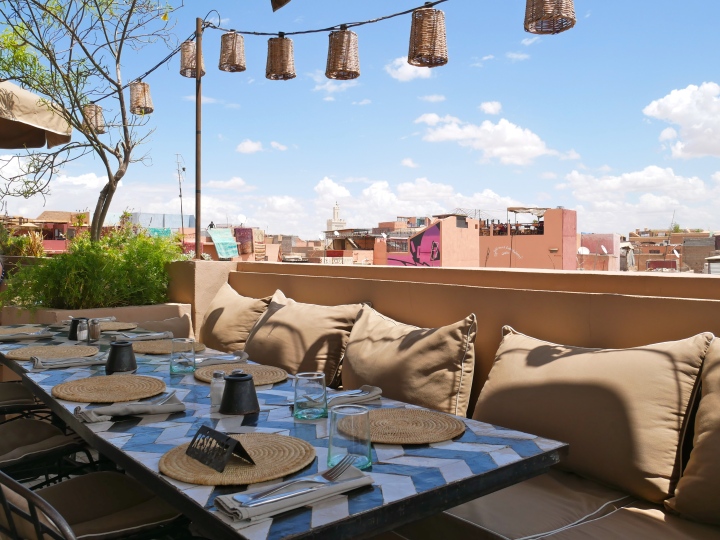 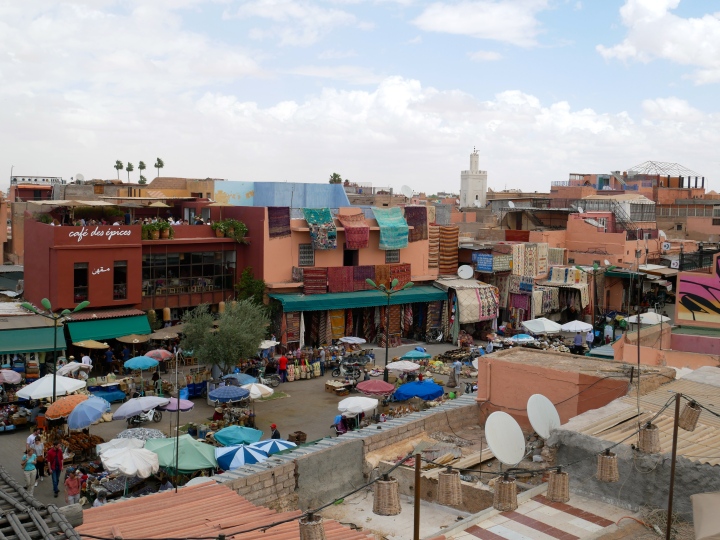 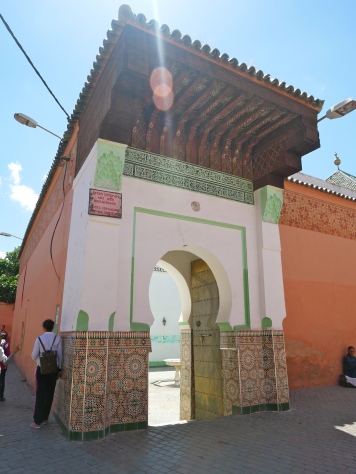 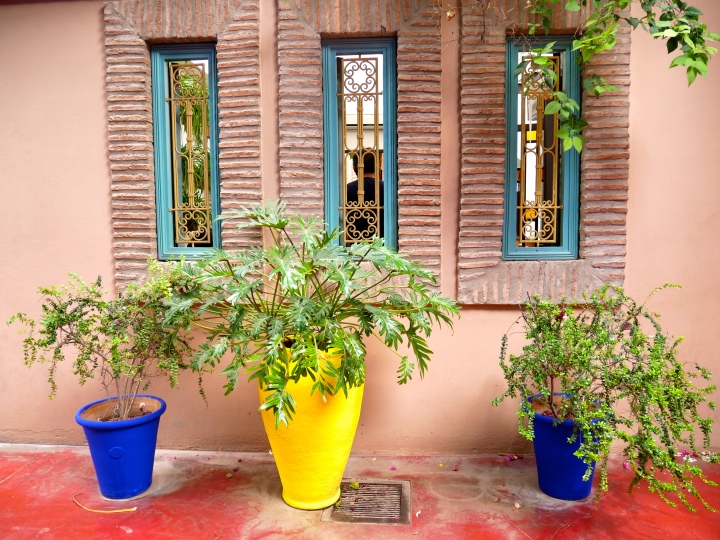 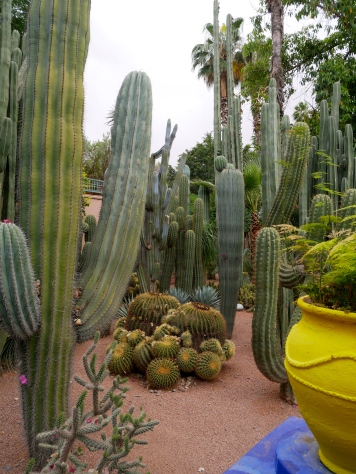 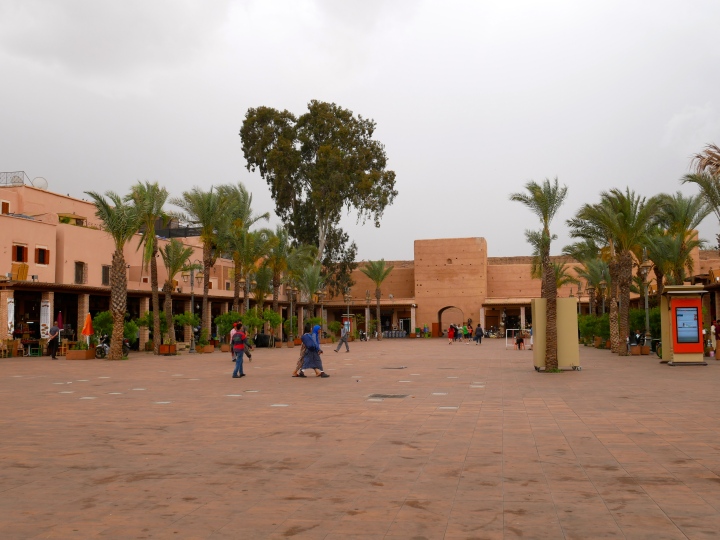 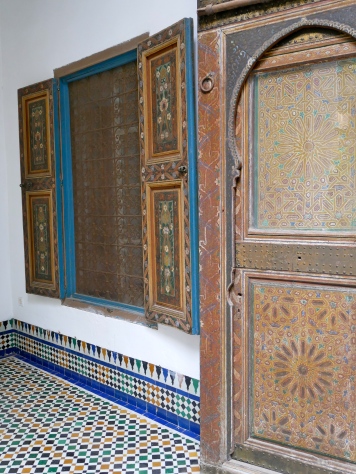 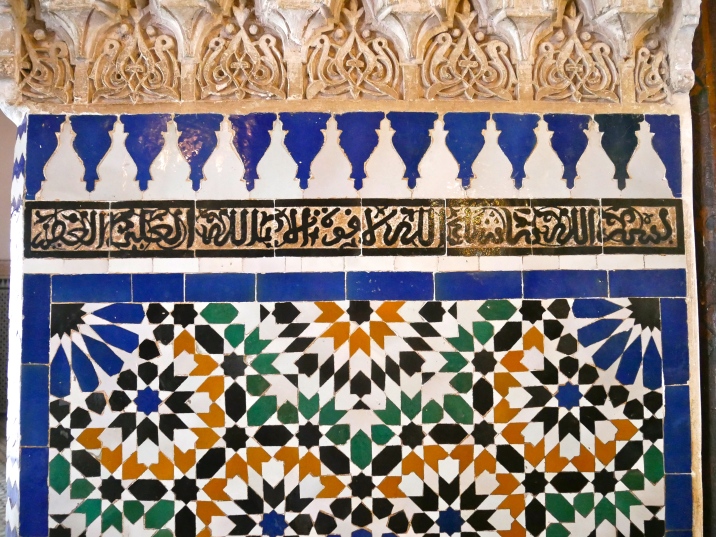 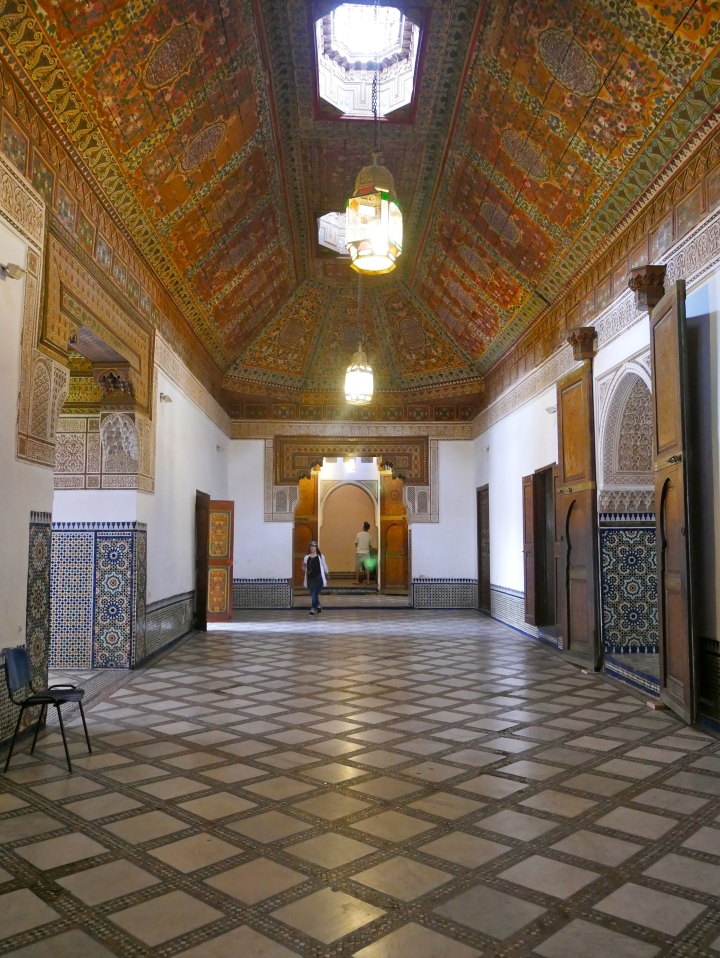 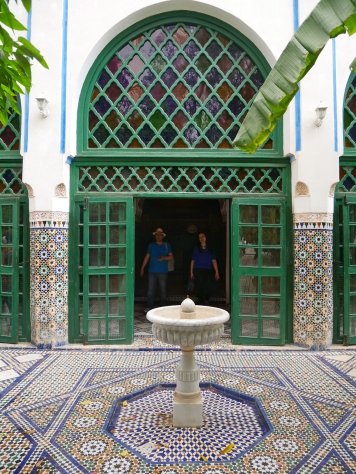 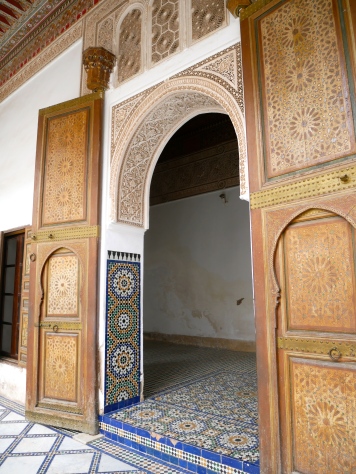 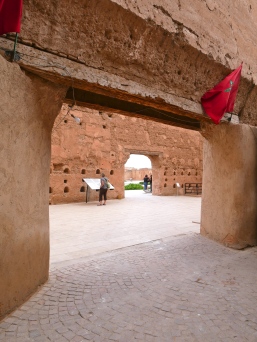 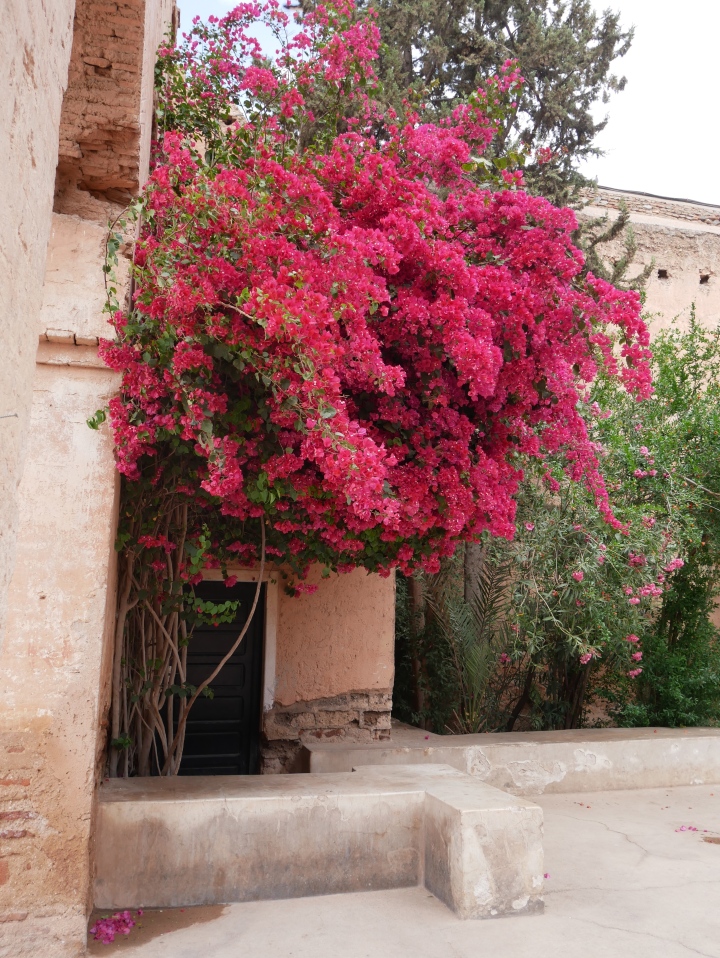 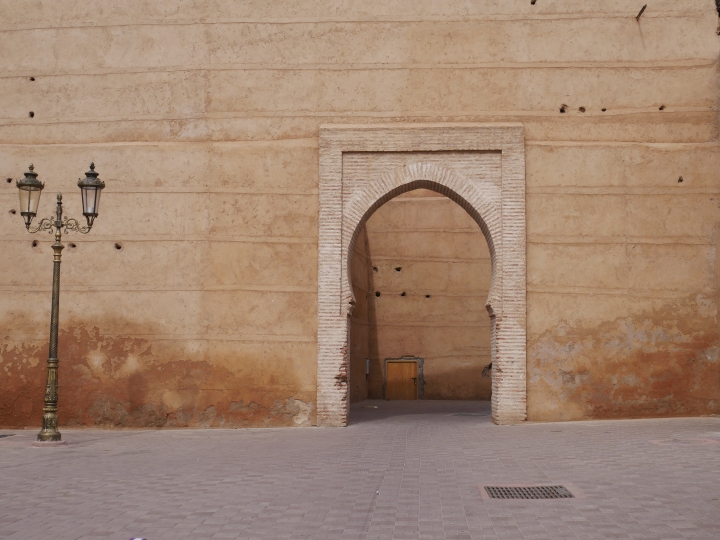 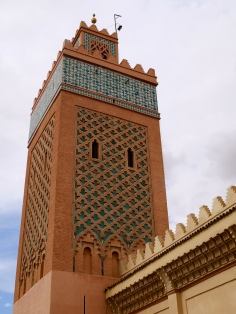 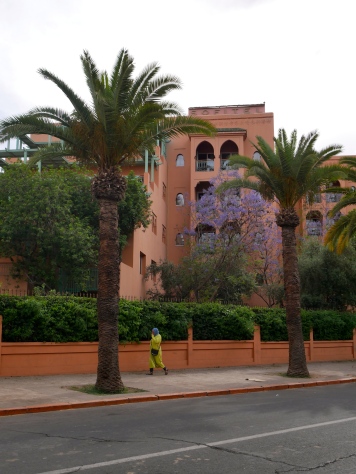 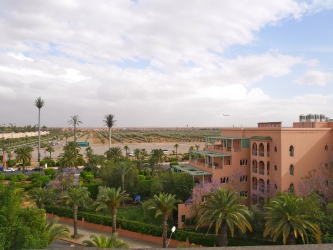 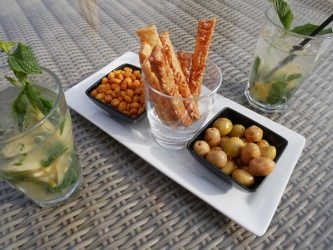